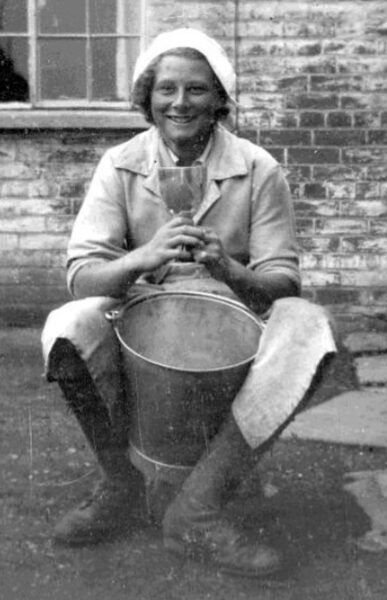 A former Norfolk champion hand milker, who was made MBE for her exceptional community service, has died aged 94. Valerie Knights, competed at the Royal Norfolk Show in the Women’s Land Army competition. It was held at Keswick, near Norwich, in 1947 and 1948. It was one of her proudest achievements to have taken on the cream of the county’s hand milkers and win the Suffield Challenge Cup in the Women’s Land Army competition. In 1948, the trophy was presented by Sir Henry Upcher in the grand ring and at the 1947 centenary Royal Norfolk Show by Queen Elizabeth (the Queen Mother).

Mrs Knights, who lived at North Burlingham, had campaigned tirelessly for road safety measures. Over the decades she helped more than 100 people involved in traffic accidents on the nearby A47. She spent a lifetime dedicating herself to the needs of others. Born in 1928, she came to North Burlingham in 1940 while recovering from tuberculosis. Here she met her husband-to-be, farmer Leslie Knights. Nicknamed Jim, he worked with his father at Church Farm and ran a local milk round with a pony and cart. During the second world war, she raised poultry and rabbits to supplement the larder and obtained a cow from Mr Knights who taught her to milk and make butter. She did an apprenticeship with the late Charles Wharton, senior, who farmed at Filby, learning how to plough and harrow with horses.

She married Jim in 1950 at North Burlingham Church. They moved to Firs Farm, Norton Subcourse, near Loddon, in 1958 and ran a dairy herd with 100 acres of arable including peas and sugar beet. When he became disabled by rheumatoid arthritis, they had to give up the farm in the mid-1960s and returned to North Burlingham. She became his carer until his death in 1983. When she heard about the Glaven Care Scheme, which had been developed by Dr Tony Allibone in Blakeney, Mrs Knight decided to start a similar scheme in the Acle area. With support from local doctors, Acle Voluntary Aid (AVA) started in 1978. Volunteers provided care in a crisis that included support such as night sitting, shopping and transport assistance, and developed a daycare and lunch club service at Acle Methodist church. AVA won awards from Whitbread, Great Yarmouth’s Rotary Club, and Age Concern. In 1994, she was made an MBE for her initiative.

Mrs Knights died at home. A funeral was held at North Burlingham Church, where she had been a long-serving churchwarden, treasurer and secretary, on April 29. She leaves a sister Rene, two children and two grandchildren.

A long-serving steward at the Royal Norfolk Show has been made an MBE for service to the agricultural industry.

Delighted to announce that Her Royal Highness (HRH) Princess Anne shall be attending this year’s show on Wednesday 29th June.

The return of the Royal Norfolk Show is just weeks away!