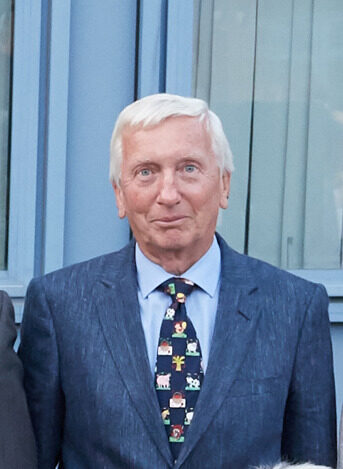 A long-serving steward at the Royal Norfolk Show has been made an MBE for service to the agricultural industry.

A long-serving steward at the Royal Norfolk Show has been made an MBE for service to the agricultural industry. Chris Self, head steward of the heavy horse section, and also former secretary to the Aylsham Agricultural Show Association for 40 years, was recognised in the latest Queen’s Birthday Honours. Under his leadership, the Aylsham Show became one of the country’s biggest one-day agricultural and food events. It also raised hundreds of thousands of pounds for local charities and good causes over the decades. For the past 52 years Mr Self has been stewarding the heavy horse classes. Appointed an assistant steward in 1970, he became steward of the Suffolks in 1978 and then assistant head steward in 1987. After the retirement of John Carrick, he became heavy horse head steward in 2013.

Christopher Edward Self became secretary of the Aylsham Agricultural Show Association in 1977. With the support of his wife, Ann, who was the long-serving assistant secretary, the association went from strength to strength. In the following years, a number of initiatives were launched. Always innovative, the Norfolk County Farm Business Competition, which was the brainchild of Foster Harrison, the 1979 president, further raised the profile of the annual show. More new sections and classes were introduced over the years. The first sheep classes were held in 1982 with 40 entries – currently, there are more than 300.

In 1995 the Norfolk Food and Drink Festival was launched by David Manning at Blickling. It became a great success, running for several years, leading to the Norfolk Food Hero Awards, which have become a major theme of the show. The association celebrated its 60th anniversary in style in 2006. For the first time in the show’s history, joint presidents were elected, Chris and Ann Self. Mr Self retired as secretary after the association’s 70th anniversary spectacular success in 2016. In that year, the AASA was able to distribute a total of £30,000 to local good causes and charities. In that year, he had retired from his Aylsham estate agency business, Ewing Self, which had been started in 1990 with Ken Ewing. Mr Self, 74, who lives in Norwich, and is a former president of one of the city’s oldest established bowling clubs, the Victoria.

Delighted to announce that Her Royal Highness (HRH) Princess Anne shall be attending this year’s show on Wednesday 29th June.

The return of the Royal Norfolk Show is just weeks away!