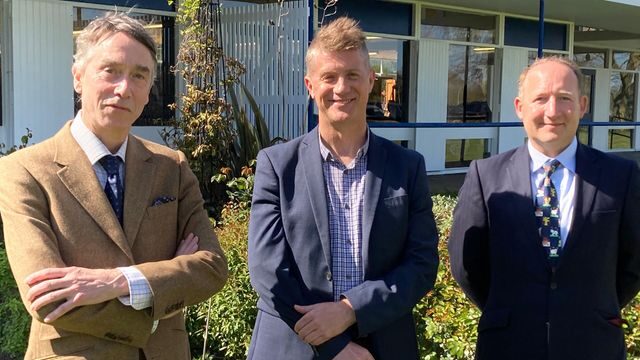 The EDP’s agricultural editor has won a top industry honour for his “outstanding contribution” to promoting Norfolk’s food, farming and countryside.

Chris Hill has been named the winner of the 2022 Timothy Colman Prize, presented by the Royal Norfolk Agricultural Association (RNAA).

The annual award was founded by the late Sir Timothy Colman, a former chairman of the organisation, which also runs the Royal Norfolk Show.

Announcing the prize at the RNAA’s annual meeting at the Norfolk Showground, managing director Mark Nicholas said: “Since 2014, and his appointment as the EDP’s agricultural editor, Chris has championed the farming sector, and raised the profile of important issues – mental health, environmental regulations, regenerative farming, subsidy policy changes – and has become a trusted friend to the sector.

“He is an award-winning journalist, having won the British Guild of Agricultural Journalists’ Stuart Seaton award for the best regional agricultural journalist – not only in 2016, but also in 2017 – for developing the East Anglian Farming World magazine, and leading the highly-acclaimed EDP Agricultural Review.

“For his outstanding contribution to the development and promotion of food, farming and the countryside, he is awarded the 2022 Timothy Colman Prize.”

After receiving his award from RNAA president the the Marquess of Cholmondeley, the journalist said he was “overwhelmed and extremely proud” to be nominated.

“I feel very privileged to represent Norfolk’s vital and hard-working farming and countryside communities for the EDP, to highlight their challenges and celebrate their successes,” he said. “So to receive this recognition from within these communities is very special to me.”

The 46-year-old, who lives in Massingham Road in Norwich, joined the EDP as a trainee in 2007.

He worked in reporting roles across the county, including as community editor for the Dereham and Fakenham Times, before being appointed as the EDP’s agricultural editor in 2014 to oversee its farming coverage and specialist publications.

David Powles, editor of the EDP, said: “We’re really proud of our agricultural and farming content and I believe it is among the very best available in the country.

“That fact is largely down to the efforts and expertise of Chris Hill, so this award is a fantastic recognition of the passion he puts into covering the brief.”

Elections and Appointments at RNAA AGM

The Queen became the association’s patron in 1952.

This prestigious award will be an accolade to the winner